Tigers and Coffee and Cake, Oh My!

It was Mr. -is-thinking's birthday the other day and I was visiting yesterday so Mrs. Im asked if I could make a birthday cake to take with me. I decided to try a new recipe and decided to have fun with it! Mr. is fond of cats and tigers, so I decided to see if I could make the cake in the video here.... it wasn't quite as good, but it was so fun I'm sure I'll do it again soon!


How amazing is that?!
Well, here is my version:
I decided to make a Swedish cardamom cake that is really good with coffee.


Fika (Swedish cardamom cake)
Mix 1 1/4 cups of flour with 1 1/2 tsp baking powder and 2 tbsp ground cardamom. In another bowl beat 2 eggs with 3/4 cup sugar until they are fluffy. In a pan melt 4 tbsp butter and then add 1/2 cup milk, bring it to a simmer, remove from heat and stir that into the egg mixture. Then fold in the flour mix and put in the oven at 180 C for 30-40 mins until the top is golden or until the cake peeling away from the edge of the pan.


I separated out the batter into parts and dyed it different colours, then I layered it in the tin 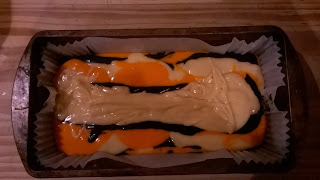 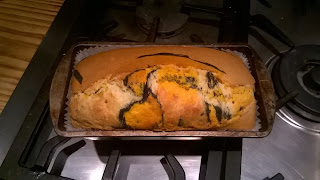 Once it was cool, I divided up the buttercream and dyed that different colours too, then it was time to get my paintbrush out 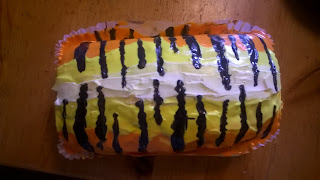 I was a little nervous about the icing getting warm and spreading on the train but there was only a bit of spread in the stripes. Next thing was the surprise inside 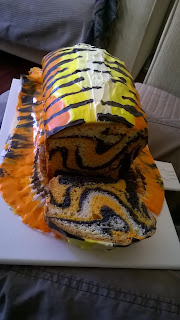 Ta daaaaa! After all that, it's time for coffee and cake, I think... 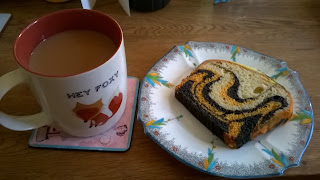 It is a leap year (boing!) and its the 29th today!
Also, today is the day where I finished my New Years resolutions - I said I would do yoga everyday until the end of February (I have) and I also made jam (twice) - hurrah! I started in January with 30 Days of Yoga with Adrienne, who is fabulous, and since then I have been working my way through her other videos seeing what I feel like on any given day

I did one of those silly quizzes online recently, like what type of shoe are you? (Flip flop) What type of dog are you? (Dalmatian) What is your spirit name? (Sky peace in Chinese. Maybe), and I did a personality one and the result was that I am a natural born leader. Hmmm. I was a little uncomfy with that and that got me thinking.
Why does leadership scare me? Maybe I think I'll mess up, I don't have the skills to do that. Or the confidence. Or the bravery. Maybe the only leaders I have seen have been pushy and I don't want to be like that - I learnt young that people call me bossy when I take charge and in a woman in our culture that is seen as tantamount to being unlovable. Maybe all those things.
Some of those things come down to the way leadership is presented and what is required - to assert yourself, to steam ahead of others, to become top dog, and none of that sounds appealing to me.
Listening to Claire Zammit talk about leadership has been illuminating, she says leadership in the feminine paradigm would be more like Glinda the Good Witch or a fairy godmother - where she waves a wand that will bless and actualise the people around her, here the magic wand is the power of connection and relatedness. Feminine leadership is not about doing it perfectly but doing it wholeheartedly. The only difference between women who lead and women who don't is willingness - not that they have the answers, not that they have more capacity.
Well, that sounds much more up my street, but I still don't really know what leadership means in my own context. I don't have drive or ambition particularly, so where do I begin? Zammit says begin with the places in your life where you feel irritated, victimised or disempowered and transform them - what would it look like for me to generate change there? If it was up to me what would I create? If I saw myself as being that powerful, how might I show up that generates an opening for that?
The thing about all this is that this is about collaborating, this is about making the world better, but it's also about power, and I guess I have to get used to the idea that I am powerful, that is the stumbling block for me. And I also think, well, who am I to change these things around me? I have no expertise, no influence. But actually all of us influence people every day whether we know it or not.
So the question is, if I really thought I had the power to change any situation, what would I change? What do I want to create in the world? In essence, what is it I value? Or maybe put another way, what gives my life meaning? Once I have contemplated that then I can take a stand for that in the world.
So many big questions... I think maybe I'll have to daydream over many cups of tea and see where my mind goes to the most and then I'll have some idea of where to start. After that it's then one step at a time and who knows where we could all end up. Maybe I'll end up a fairy godmother after all.... I've always wanted my own wand 😉
Posted by Nat at 00:02 No comments:

Email ThisBlogThis!Share to TwitterShare to FacebookShare to Pinterest
Labels: healing

Saramica hosted a Valentines day competition called 'To the Moon and Back' - and I was one of the winners! I got them through the post this morning, it was so exciting! 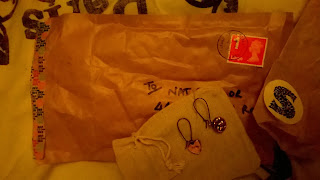 If you haven't seen her work, go to Sara's website, she uses natural materials to create jewellery - one of my most commented pairs of earrings are some reak acorns covered in brass with pearls in them. Beautiful!
Posted by Nat at 21:00 No comments:

I had sign language practice today with a colleague and she said she had to cut it short because she was going to a concert in the music hall on campus and did I want to go? I wasn't doing anything else so I ended up going to see a choir and an orchestra perform pieces in French, I'm not sure what they were about, Louis VIII maybe? It was very fun all the same! I met a couple of the ladies from our admin dept. and I'm set to go for coffee with one of the girls on Friday. Fun! The choir was amazing, and the orchestra were lovely. The performance was only 40 mins, but I really enjoyed it. 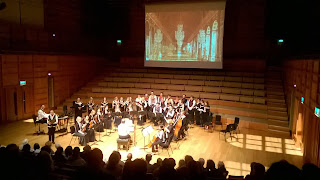 Nat
I am almost entirely ridiculous, I have a slightly unhealthy preoccupation with childrens literature and I giggle quite a lot. I think that fairly much sums it up.